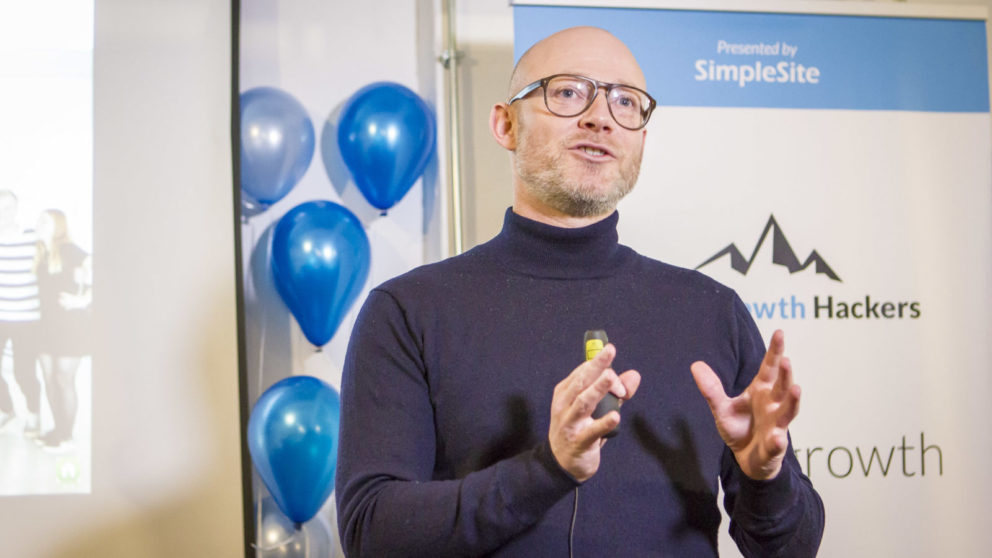 "We only charge for very measurable results. Some things have worked really well, and we have launched things that have been less successful." Carsten Pedersen, CSO Dental Media.

Software for the business community is big business, and the Danish growth company Dental Media has found a niche in that industry. Backed by a Nordic growth programme, the three founders are now testing if American dentists can be persuaded to use their product to land more patients.

There are balloons in different colours, and a mix of wrinkled shirts, round specs, worn-out sneakers, and suits. Land of the entrepreneur.

We are at the tenth Nordic Growth Hackers event in the shared workspace community Founders House. After the first three presentations they serve birthday cakes to celebrate the anniversary, and people from the wine-app Vivino have brought champagne – of course.

Carsten Pedersen walks onto the stage, and after his presentation several in the audience are interested, but also a bit puzzled.

“Why dentists? Can’t your software be used in other industries?”

Numbers show an increase in turnover of 700 per cent from 2 million DKK to about 15 million DKK in just one year.

The question lingers for a few seconds before Carsten Pedersen offers a somewhat enigmatic answer. He has built some software to get people to climb into a dentist’s chair, which he sells to dental clinics. His  company recently submitted their first annual report, and the numbers show an increase in turnover of 700 per cent from 2 million DKK to about 15 million DKK in just one year.

Surely it must be adaptable to other industries, a member of the audience says.

From simple sale to full service

That it can, but for now Carsten Pedersen is sticking with dentists.

He is the CSO of Dental Media, and has previously worked with dentists in the start-up of another business. And herein lies the reason why the dentist’s chair is the focal point for Dental Media. What started as simple marketing on social media is now going to be a service which optimises work processes, and marketing, and ensures that dental clinics are fully booked.

Instead of focusing so much on patients, we can help the dentists optimising their clinic.

“Instead of focusing so much on patients, we can help the dentists optimising their clinic. One of the things we do is that we make sure capacity is for example 90 per cent,” Carsten Pedersen says.

Dental Media wants to be software as a service, SaaS.

Software is not what it used to be

Once, software was something you put in your PC with a floppydisc or a CD-ROM. Today it is often something you subscribe to that a technology company regularly improves and updates (and cashes in on).

Enterprise software and SaaS, was among the highest funded industries in Danish startup tech-funding in 2017 with combined investments for 156 million DKK ($26 mio.). It is also a massive industry on a global scale.

It is an industry which is radically changing the way companies work, get clients, and streamline themselves.

Some of the major international success stories of Saas are Dropbox, Slack, and SalesForce. Optimisation and streamlining. Faster, bigger. As for the companies mentioned, their software is applicable across industries.

The American giants have received investments worth billions. But it is also possible to create software for just one industry and be successful. That is the case for Dental Media, which is trying to make life easier for dentists.

From Denmark to the US in four months

Dental Media was recently chosen amongst 700 companies to be a part of Nordic Scalers, the Nordic Council of Ministers accelerator programme. Its aim is companies that have had a turnover exceeding 2 million euros, and have succeeded with a proof of product in at least one market.

The accelerator programme is now getting Dental Media ready to expand their dental success to the United States. However, Nordic Scalers is not the reason why Dental Media has chosen the US as its next growth market.

According to their own analyses, Dental Media’s products are a really good fit with five markets globally. The first three, Denmark, Norway and Sweden, Dental Media is already pursuing. The fourth, which they are keeping secret, they have no plans to expand to just yet, and the fifth market is the US.

“Here at home we have to teach our customers to think commercially. That is not a problem in the US. On the other hand it is a market with a lot of competitors,” Carsten Pedersen says.

Here at home we have to teach our customers to think commercially. That is not a problem in the US.

That is why it is extremely beneficial that Dental Media has been chosen to participate in the Nordic Scalers programme, he believes.

“The attending companies are more mature than in many other programmes. But you can easily be mature and have a hard time pulling yourself up, and that’s where it’s so great to have them to hold your hand and take you to the next level,” Carsten Pedersen says.

The programme already ends on 31 May, after which Dental Media will attempt to use the knowledge from Nordic Scalers to get into the American market and open a branch office in New York.

Bootstrapping has brought them this far

Dental Media is a bootstrap company. It has not taken on investors, though it is a constant dilemma because the company has great growth ambitions.

“Maybe we’ll look into taking on investors some time. But I know a lot of companies that have received funding, and it isn’t always a bed of roses. Plus we like being three partners, and not having to ask for anyone’s permission,” Carsten Pedersen says.

I know a lot of companies that have received funding, and it isn’t always a bed of roses.

However, he will not confirm or deny that they are considering external financing.

At the moment, the company has 19 employees and three founders, and in connection with the venture into the American market the plan is to open a branch office in New York in the third quarter of 2018. Branches in Sweden and Norway are already open.

“Our mistakes have taught us to say no”

At Dental Media, at first, the customers, i.e. dentists, have been embraced as the most important critics as well as those who were to design the product.

When the dentists were unsure whether the marketing could pay off, Dental Media found the numbers and showed the dentists exactly what profit a single campaign made. When the dentists thought that it gave a lot of extra work to the receptionist that there were so many new patients, they added a call center. That approach has also posed challenges.

“We have tested a lot of things, and in hindsight there are some things that haven’t gone so well,” says Carsten Pedersen.

But how has your approach been? How much have you tested things?

“We have tested everything in the market. We don’t have a lab. We have made different campaigns, aimed at getting normal patients to go to the dentist. A lot of people want to go to the dentist, but, as you may know from personal experience, first thing you have to do is find a dentist, and then it kind of ends there. So we’ve made some campaigns on different social media: ‘Hey! If you need a dentist, we’ll give you a call and offer you an appointment with one.’”

And then you sell that service to the dentists?

“Yes, ‘no cure, no pay’. If you don’t get any patients, you don’t pay. We only charge for very measurable results. Some things have worked really well, and we have launched things that have been less successful. For instance, we have tried getting patients for highly specialised treatments. It turned out that we could get patients to go to the clinic, but we couldn’t get the patients to undergo treatment. And that has been negative and expensive. That was something we thought was good, and invested a lot to do, but it turned out not to work.”

We have become more focused on what the core business is. We have actually started saying no.

What have you learned from this?

“It has meant that we will be far less risky in the future, because we are constantly being met by customers who say, “Can’t you just…?,” and then we say, “Of course.” We have become more focused on what the core business is. We have actually started saying no.”

Carsten Pedersen does not think their approach has been wrong, but their trial and error method has acted as a funnel where they have come closer and closer to what the main focus of the company should be.

“It has been a natural process where we have been able to see what didn’t work. Really, we’re just throwing away a lot of money, and wasting our customers’ time with things that don’t work. So in that sense, it has not been difficult to try to focus on the things we know work for us.”

The Nordic Scalers programme is a growth programme backed by Nordic Innovation under the Nordic Council of Ministers. The seven Nordic companies are selected from more than 700 Nordic growth companies from a network across all Nordic entrepreneurial environments: Epicenter Stockholm, Startup Norway, Maria 01 from Finland, Icelandic Startups and Rainmaking in Copenhagen.

The reasons why these seven have scaling potential:

They all have at least 2 million euros in turnover or investment capital. They have a goal to set up shop in the United States within six months after the end of the programme, 31 May 2018. And they have a scalable business model that they have tried in practice by already scaling it locally.